To solve this issue, we modify Full GC timing strategy:
(1) Always invoke full GC before extending the heap.
(2) Increase the heap if not enough old-objects space.
This modification introduces a bit slow down, but reduce memory
consumption.

(*1) RGenGC doesn't skip sweeping for old-objects. This is another issue.

There is a question: "When should we invoke invoke full GC?".

Usually, generational GC uses the strategy that "when a space for old
objects is full, then invoke full GC".

Here is a pseudo code of RGenGC:

This strategy works fine for memory rich machines, because only a few
full GCs are invoked.

However, this strategy causes more and more memory consumption.

Fig.1 is a result of (modified) discourse benchmark (Thanks Sam
Saffron!!). X-axis is GC count and Y-axis represents a number of slots
(objects). total_slots' is avaialbe slots to use,old_object' is
old_object_count.

As you can see, old_object_limit is too high and total_slots are
expanded (x1.8, specified by GC_HEAP_GROWTH_FACTOR) before full GC.

To solve this issue, Ruby 2.1.1 introduced an environment variable
"RUBY_GC_HEAP_OLDOBJECT_LIMIT_FACTOR" (use `old_object_limit_factor' for
short).

This variable control how to extend `old_object_limit'.

In pseudo code, we changed from

The default value of this environment variable is 2. So it is same
behavior on default.

With RUBY_GC_HEAP_OLDOBJECT_LIMIT_FACTOR=1.3, the benchmark result is
Fig.2. 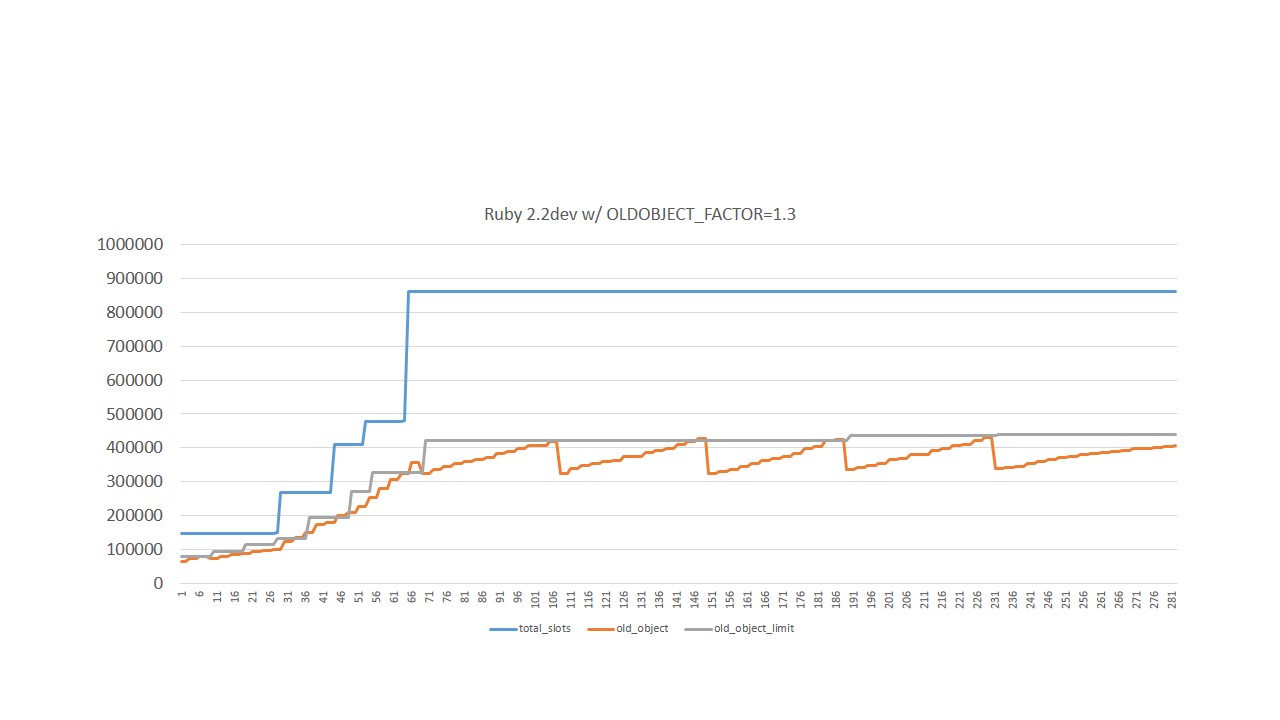 We can observe that the total slots doesn't grow than the default
behavior.

Try this environment variable if you have trouble with memory usage.

Note that if you want to disable generational garbage collection, you
can specify 0.9 (any number lesser than 1.0) for
RUBY_GC_HEAP_OLDOBJECT_LIMIT_FACTOR. With this technique, on every GC
"old_object_count > old_object_limit" is true and do major GC.

BTW, this variable should be noted on NEWS file. I missed to add it.

"RUBY_GC_HEAP_OLDOBJECT_LIMIT_FACTOR" with small number can solve this
issue, but we need to specify correct value for each application. It is
tough work for us.

With these graphes, we find two insights.

To invoke full GC before expanding, we set a upper bount for
old_object_limit as "total_slots * 0.7". This value is same as the
threshold to determin expanding heaps or not.

With this proposal, we can reduce total_slots consumption (Fig3, Fig4).

However, more and more GC invoking time. It is trade-off because
reducing total_slots introduces more frequent GC. We can solve this
issue by making condition parameter 0.7 as tunable.

Current growing speed of old object number is too high. So we need to
consider about promotion strategy. Current strategy is "promote young
objects when young objects survive one garbage collection". We already
implemented "RGENGC_THREEGEN" mode, which enable to filter unexpected
promotion.

NOTE: THREEGEN = 3gen is strange name because generation is only two. We
will change this mode name to AGE2PROMOTION and so on.

We successed to use partial marking on minor GC. However, everytime
sweep all available slots. Sweeping time is not so big, but there is a
space to optimize it.

OMG. Thank you for reporting.

Yes. It will do useless marking (minor marking) because of there are no empty spaces.

I also did not set MALLOC_MMAP_THRESHOLD_ for eglibc malloc;
only MALLOC_ARENA_MAX=1 MALLOC_ARENA_CHECK=1. So this may be
a problem of malloc fragmentation, too.

Updated by Student (Nathan Zook) over 6 years ago

I wonder if it might not be better to give the user control? Specifically, consider a web application. It would make sense to hold off promoting objects created during a call-response cycle until the end of the cycle. But there is no way for the GC to know when that might be. This is trivial for the application to know.

More generally, applications know when they are entering periods with lots of mid-term objects being created. Adding GC.no_promote would allow an application to tune this behavior. I would suggest allowing calls with and without blocks, the blockless form would be reveresed by GC.allow_promote.

GC.promote/allow_promote can work in some cases, but I consider it too
ugly; as ugly as OobGC. It would also be error prone and hard to work
in multithreaded situations.

I would rather have work towards automatic run-time optimizations
(perhaps via online profiling/escape-analysis) than encourage users to
do brittle/ugly things in their code for short-term benefit.

After introducing AGE2_PROMOTION patch, only a few old objects are added for each minor GC.
The impact of this issue (too many slots) are not critical now. But some application can not protect increasing total slots.

This algorithm simply do:

This picture shows the (a) total_slots (b) old_objects (c) ru_minflt (used memory pages given by getrusage) for current trunk and modified (above algorithm introduced) trunk using gc_tracer.

(1) ru_minflt (rough memory usage) is linear to total_slots.
(2) heap_slots/modified is fewer than heap_slots. It has impact.
(3) old_objects/modified is reduced periodically. Do major GC aggressively compare with current trunk.
(4) Modified trunk invokes higher number of GC events (similar to GC count). This is because total_slots number is fewer than current trunk. It is intentional.

You can increment consuming slot number using environment variables. So that I will introduce this patch. It means that default GC parameter is "low memory consuming/low performance" compare with current trunk/Ruby 2.1.

The patch is also small:

PS. BTW, AGE2PROMOTION strategy introducing young objects, which is promoted from infant objects and will be promoted to old objects. I also counts them and I found that they are only a few objects in this program. 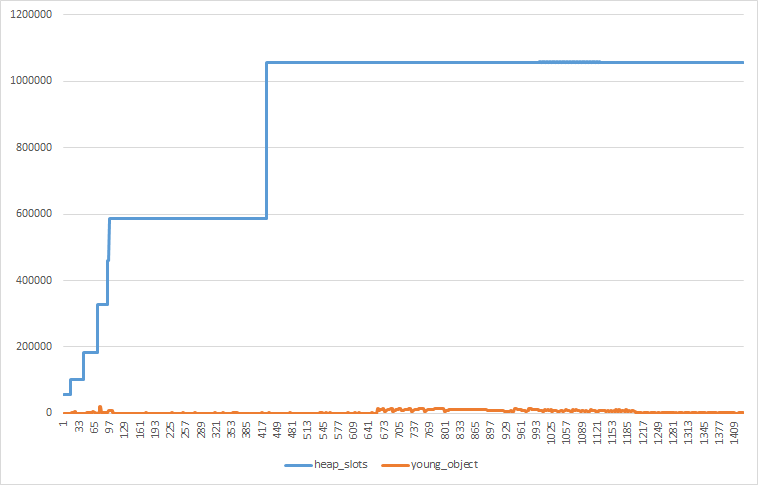 The following patch is for current Ruby 2.1 branch.

Can anyone (who has memory consuming trouble) try this patch on Ruby 2.1 trunk?

I think this patch will decrease memory consumption on Ruby 2.1 (but increase major GC counts).

Chikanaga-san:
Please consider this patch for next Ruby 2.1 release.

I checked benchmark results and no big regression are observed comapre with current edge of Ruby 2.1.
http://www.atdot.net/sp/raw/ywfnan (ruby_2_1a is same as ruby_2_1. to check accuracy (ideally, there should be no difference)).

I understand that the last patch doesn't work. Please try it:
http://www.atdot.net/sp/raw/sabnan

Thank you ko1 for providing a patch to ruby_2_1. I can apply it cleanly.
Ant thank you eric for your confirmation.

Updated by usa (Usaku NAKAMURA) about 6 years ago